Read about other packages

Climb Nyiragongo Volcano with us, from Goma and camp for 1 or 2 nights on the rim of the giant crater high above the violently active lava lake.

Lakes of hot lava are one of the most spectacular forms of volcanic activity, but they are very difficult to see since there are only a few of them in the world at any given time. So, if you want to see a really impressive lava lake, you have only one option left: Nyiragongo.

Nyiragongo Volcano is located in the east of Congo DRC, at around 19 km from Goma and is the most active volcano in the world. In 1977 and 2002, flows of very liquid lava broke out from cracks in the volcanic slopes.

The lava covered 17 km reaching the town of Goma in just a few minutes, killed dozens of people, and left hundreds of thousands homeless. The eruptions temporarily drained the lava lake in the summit crater while volcanic gases suffocated the heather forests on the upper slopes.

Now the forest is recovering, and the wildlife is beginning to return. The climb up to and down from Nyiragongo is strenuous and takes about 4-5 hours in often hot conditions, but the path is relatively easy and not excessively steep; there are a lot of rare birds and small mammals along the trail. 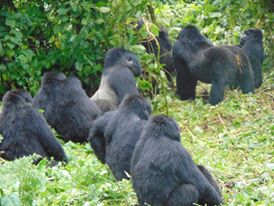 Day3: Transfer to Kibati Village where the Climb starts. 10.30 Am. Start Climbing- arrive at the top late in the afternoon at around 04 or 05.00 pm. You will admire the lava lake all the evening and night- Overnight in cabins on the rim of the giant crater high above the violently active lava lake.

Day4: After breakfast at 7.00am, Back down- arrive in Kibati village at around 10 or 11.00am- Meet your Driver/guide and transfer back to Kigali.

Cabins as shelter on the rim of the volcano.

Are you interested in our tours packages? Let us know.