Read about other packages

Today the hiking begins at the height of 1,667 metres climbing to 3,171 metres in Kilembe at 8.30am but can leave as late as 10am. Meet your guides and briefing. You walk 2.2km to the UWA rangers post at 1,727metres.Here the rangers brief you on the day’s activities and rules of the National Park.

From here the first two kilometres climbs steadly through prestine montane forest, with tall trees thick undergrowth and a multitude of different species of birds and primates. Then a fairly strenuous climb up a main ridge to your first night at Samalira Camp. As you leave the rangers post you walk along a path through tall grassland and ferns which gives way to magnificent pristine forests. As this is a new route the forests are untouched and carry a wide variety of trees and plants. Many species of birds can be heard and seen in this rich environment. The first few kilometres climb steadily crossing several small streams and rivers then we start climbing the ridge. As we climb the trees become taller and more straight and it is common to see and hear many types of primates, on the left you may hear troupes of chimpanzee echoing around the valleys. Particularly around our lunch spot at 2,570m it is possible to see troupes of 20 or more black and white Colobus monkeys or Blue monkeys as they dash through the trees.

After lunch we continue to climb steadily passing a rock shelter (2,785m) previously used by poachers to hunt primates and dika (small antelope) After the rock shelter the climb enters the bamboo zone and becomes steeper. As we near the top we break out of the bamboo to fantastic views of the valleys and hills below looking across to Lake George and Queen Elisabeth National Park in the distance. The equator lies just north of Lake George. Samalira Camp is at 3,171 metres, meaning views or lookout and offers great views of the surrounding landscape and Kasese town. (Mobile network available at this camp) Sleep at Samalira Camp

Day 2. 6.9 kilometres 4 to 5 hours. Start height is 1,667 metres climbing to 3,515 metres on the ridge top before dropping to 3249 metres then climbing steadly to Kiharo Camp (Camp 2) at 3,380 metres . After a hearty breakfast we commence walking at 8.15 and initially climb steadily then cross a small stream and the climb then becomes steep for about 200 metres up a narrow moss covered ridge. The thick moss covering the ground and rocks under the giant heather trees is spectacular and we ask you to help preserve this prestine environment by keeping to the pathway. The views give us the impression that we could fly as we look across the many ridges and valleys far below. You can see Kilembe village deep in the valley and across Lake George. After a relatively short climb the trail becomes less steep as we pass over Chavumba (meaning heaven) at 3,316m we then cross a small flat valley to climb up a steady ridge through moss covered trees and misty forests to the top of the ridge at 3,515 metres. Here we descend steadily for about one kilometre before descending a steep drop of 200 metres into the Nyamwamba valley and a well earned lunch break at Polies Rock Shelter 3,249 metres.

Hiking distance is 6.9 kilometres 4 to 5 hours.

After lunch we climb steadily above the Nyamwamba River for 1.6km though old giant heathers covered in old man’s beard moss to Kiharo Camp at 3,380 metres directly at the base of some good granite rock climbs of 20 to 40 metres with towering peaks above. Sleep at Kiharo Camp

Day 3. 6.8 kilometres 4 to 5 hours Start height is 3,380 metres climbing to 4,200 metres on the top of the confluence between the two valleys then dropping to Camp 3 at 4,030 metres. After an early breakfast we climb a short steep incline through the narrow valley with large moss covered rocks. This area is stunning as you weave through the narrow passes near the foot of towering peaks till you reach the wider upstream Nyamwamba River. From here you climb steadily along the valley floor with small bogs and many giant lobelias. Both sides of the valley are lined with sheer cliff faces as we near the confluence of the Nyamwamba and Namusangi valleys. Our third camp at 4,065 metres, is above Lake Kopello and has spectacular views looking down the valley of nine glacier lakes, the Namusangi valley. Sleep at Camp 3

Hiking distance is 6.8 kilometres 4 to 5 hours

Day 4. 6 kilometres 5 to 6 hours Start height is 4,030 metres climbing to 4,450 metres on the top of Bamwanjara Pass then dropping to Camp 3 at 4,006 metres. (Camp 4 is slightly lower than Camp 3) We start by ascending to pass through Bamwanjara Pass then descend to Kachope Lakes The top of the pass trail offers spectacular scenery of the main peaks ahead particually on a clear day. On the right one can see McConnell’s Prong named after a British explorer and geologist. The Kachope Lakes area is one of the three known areas where on a misty day one may catch a rare glimpse of the Rwenzorii leopard, which is very dark sometimes nearly black as it blends in with the black basaltic rock surroundings. Little research has been done on this animal yet it is more rare than the snow leopard, which has gained so much attention in recent years. After passing Kachope Lakes we climb to McConnells Camp at 4,160 metres where we prepare for the early ascent to Mt Baker. Sleep at Camp 4

Day 5. 4.3 kilometre climb 4 to 6 hours up and 2 to 3 hours back down. Set off by 6.30am to climb the Mt Baker Peak 4,842 metres. Ascent time from McConnell’s Camp (Camp 4) to the top is three to four hours and descent three hours. This is a steep rocky climb where you need a good head for heights as some sections like the crevice climbing down to the glacier has a sizeable drop off the side. Although steep Mt Baker is considered non-technical except in the snow season (wet season) of April-May and September-October nevertheless safety ropes will be used at all times on steep sections. After climbing up you descend along a crack in the rock face to the glacier and a short 300 metre walk to the peak.

If we have fine weather or a break in the cloud the views of the main peaks of Magherita, Alexandria, Stanley’s plateau and the glaciers are fantastic as you see the splendour of these beautiful snow capped mountains. The view is awesome!! After absorbing this lifetime experience we walk back across the glacier climb back up the crack in the rock face and descend to McConnell’s Camp. Sleep at Camp 4

Hiking distance is 4.3 kilometre climb 4 to 6 hours up and 2 to 3 hours back down

Day 6 6 kilometres 4 to 5 hours Start height 4,006 metres climbing down to Kachope Lakes at 3,985 metres then over Bamwanjara Pass (4,450 metres) then dropping to Camp 3 at 4,006 metres.Today you walk from Camp four down to Camp three past Kachope Lakes and up and over Bamwanjara Pass. Here you have good chances to see hyrax sitting at the entrance to their rock shelter. Their main predator is the Rwenzori Leopard Panthera pardus ruwenzorii which is rarely seen. The leopard has been heavily poached in the past and there are few left however on a rare occasion on a misty or overcast day you may be lucky to see one briefly as they move between the rocks. Sleep in Camp 3

Hiking distance is  6 6 kilometres 4 to 5 hours

Day 7. 5.8 kilometres 4 to 6 hours Today we descend via the Namusangi valley across open moreland and large areas of tussock grass. As this is a valley floor it is rather wet and at times quite boggy. It is a good idea to have rubber boots for this section. We contine down the valley passing several small waterfalls and moss covered valleys until we reach the steep rocky section above Mutinda with fantastic views of Mutinda Peaks directly ahead. We turn left just as befroe the river drops over a sheer cliff to the Mutinda valley to walk down several steep slopes until we reach the valley floor. Here we again cross the river before climbing up to the Mutinda Rock Shelter. The Mutinda Rock Shelter is large enough for 80 to 100 people to take shelter from the weather as offers a dry night for our last night. Sleep Mutinda Camp

Hiking distance is  5.8 kilometres 4 to 6 hours

Day 8. 16.7 kilometres 6 to 10 hours distance from Mutinda to Kalalama Camp is 5.1km plus from Kalalama to the Rangers post 11.6km. 7am start as we descend down a series of rocky streams and valleys often passing or rock hopping across the rocks to Kalalama Camp 3,134 metres. As we near Kalalama Camp we pass though a beautiful valley dotted with Gaint Lobelia. After passing the Lobelia garden we climb to reach Kalalama Camp which is perched on a high ridge overlooking the Kilembe valley and Kasese town. Here we have a quick lunch before continuing to descend down through the bamboo forests. Here we cross to the ridge climbing to Samalira camp just above the lunch spot on day one. Here we have a short break before we walk the final distance through mountain montane forest to the Rangers Post 1,727 metres. After debriefing, we sign off and walk down to Trekkers Hostel. Some fast walkers have descended to the rangers post by midday however the majority of people arrive at the ragers post around 3pm.

NOTE: In order to climb Margherita Peak or any of the other summits, will need to bring their own climbing hardware, crampons, and ice axes. Bivouc gear is also a good idea. 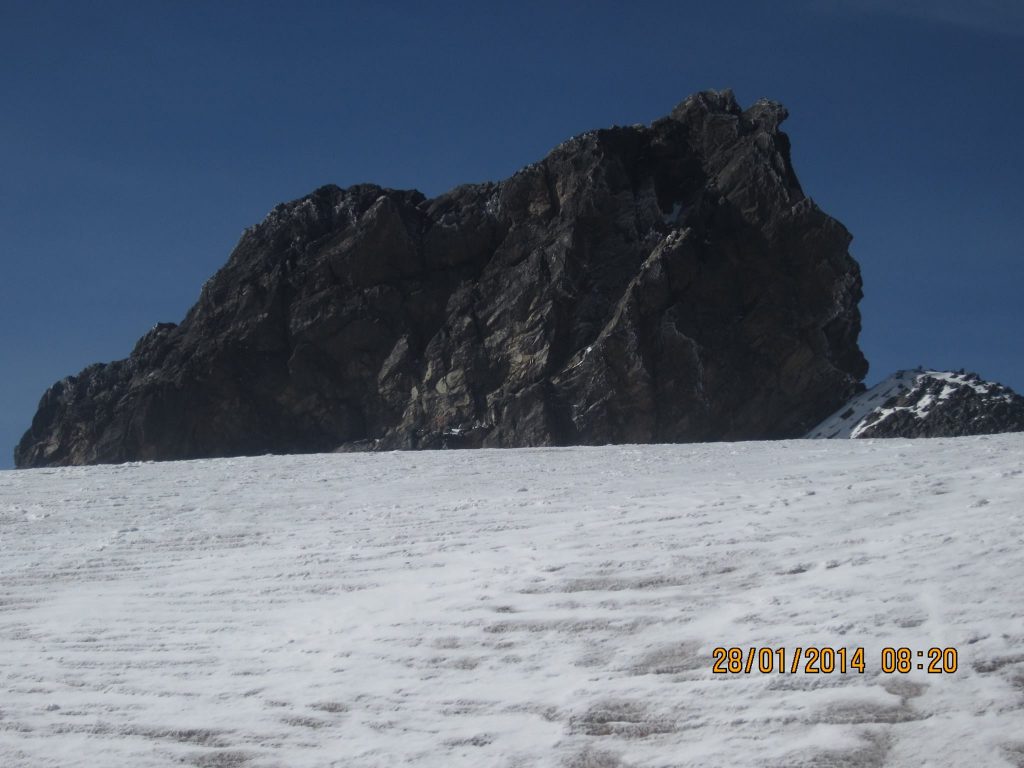 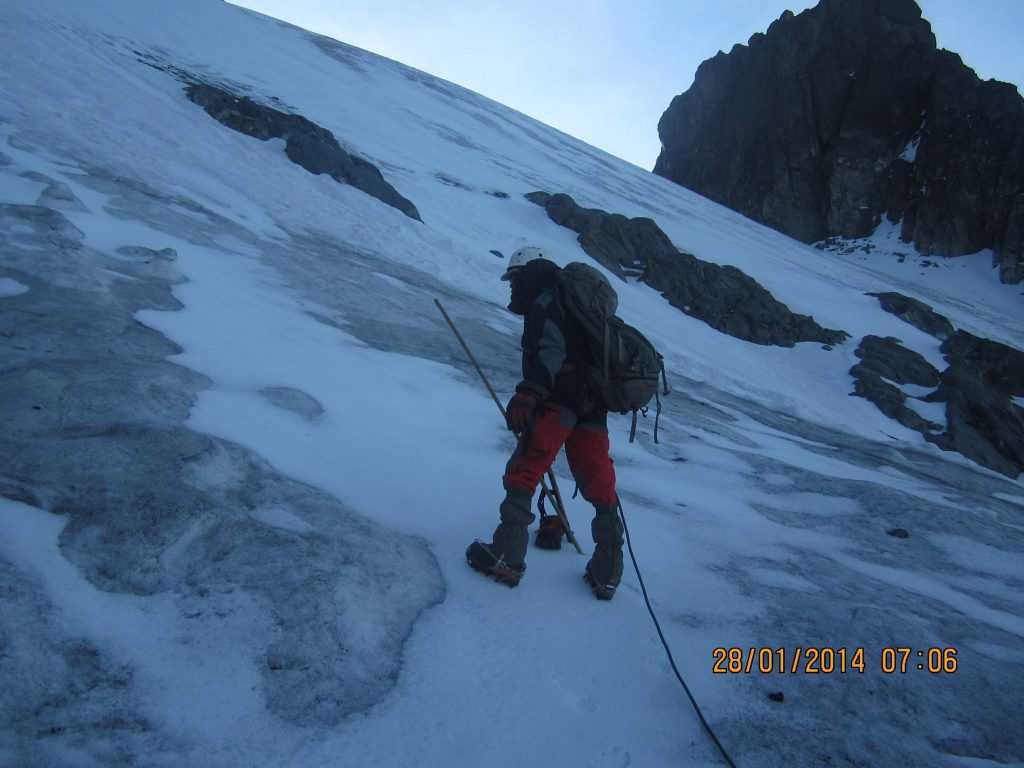 Are you interested in our tours packages? Let us know.